More than 50 Queensland farmers and graziers have signed an open letter calling on the federal and state water ministers to reject Adani’s current groundwater plans that scientists and experts say could damage their precious water resources.

The open letter to Ministers Price and Enoch states approving Adani’s plans “would be telling mining companies that no matter how devastating the potential risks projects pose to our water, they’ll receive the green light anyway”.

The letter will also run as a full-page advertisement, funded by Farmers for Climate Action supporters, in Queensland’s Courier Mail on Saturday.

Galilee Basin (Aramac) grazier Jenny Todd said: “We simply can’t afford to have Adani come in and play around with our precious groundwater. It’s too risky for the government to rush approvals and at a time when climate change is driving more extreme and intense droughts, heatwaves and bushfires.

“CSIRO say Adani’s data is unverified, water scientists say the project could permanently dry up the Great Artesian Basin springs and the Federal government’s own research highlights that the cumulative impacts of the extractive projects planned for this region are far greater than originally thought.

Central Queensland (Marlborough) grazier Simon Gedda said: In recent years our property has experienced a record breaking dry spell, a shocking flash flood which washed away massive old bluegums and inundated our home and an unprecedented heatwave event which ignited three bushfires fanned by cyclonic winds in the area. This is climate change.

“If governments give Adani’s groundwater plans the green light, without conducting further detailed research about the risks scientists have outlined, they will be sacrificing our future for a group of big miners. 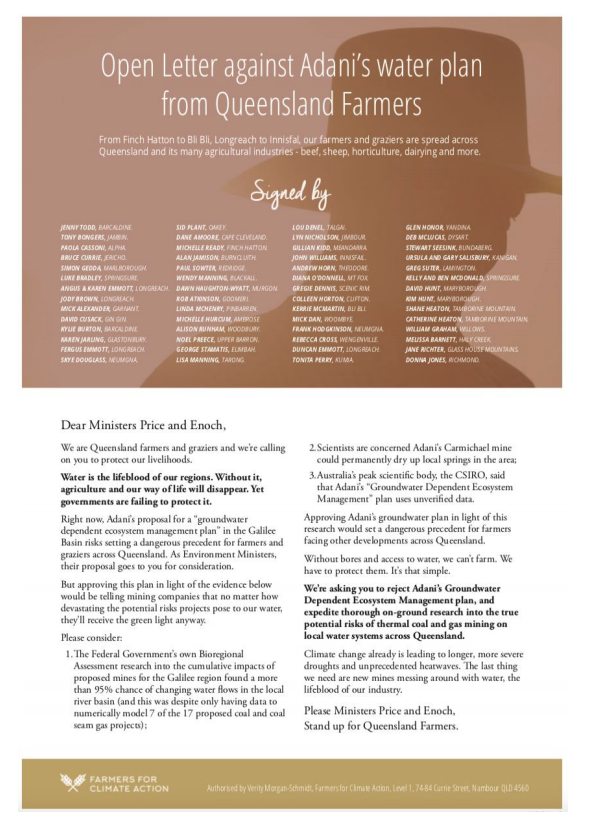